The essay was published at The Times of Israel, Tribune Juive ( Paris, France), and The JerUSAlem Connection Report ( Washington DC, the US).

Michael Rogatchi’s now widely known Forefathers works have originated as his Uzhpitzim series, personalised images of Jewish patriarchs and the formatting leaders of the nation. 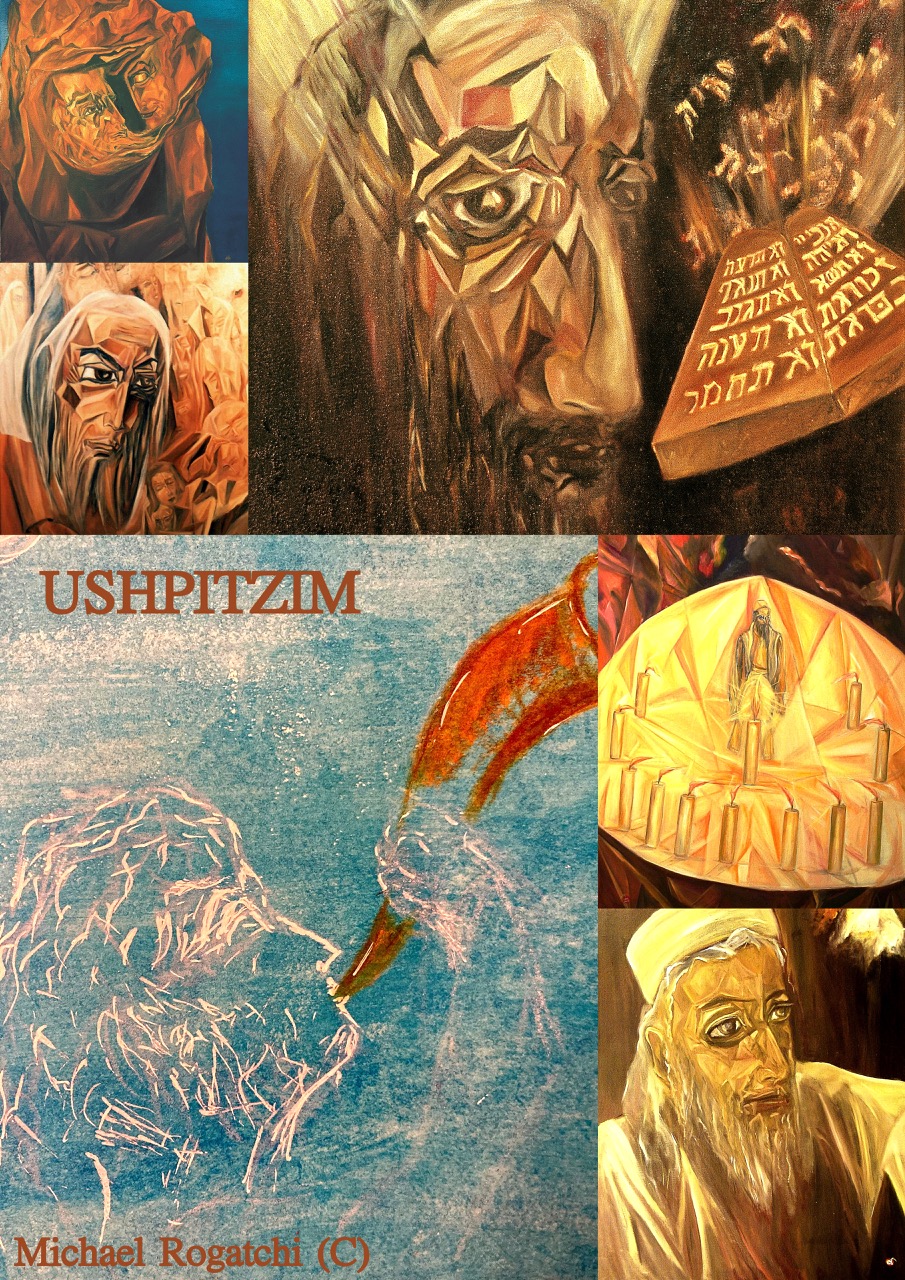 Each of those modern classic images has its own history, and they were not created by the artist in a chronological order.

The first appeared Moses, in a rare phenomenon of a subconscious art, or actually communication which Michael was blessed to receive and which he was extremely lucky to read. Back in the end of the 1990s, Michael saw his Moshe Rabbeinu in his dream, exactly as he had depicted him in his great painting: live, questing, having his thoughts and doubts, living through many torments, but determined, strong, unique Jewish man from whom we all are receiving a bit of our enduring National strength, the yeast of our ongoing  national, and often personal, survival. 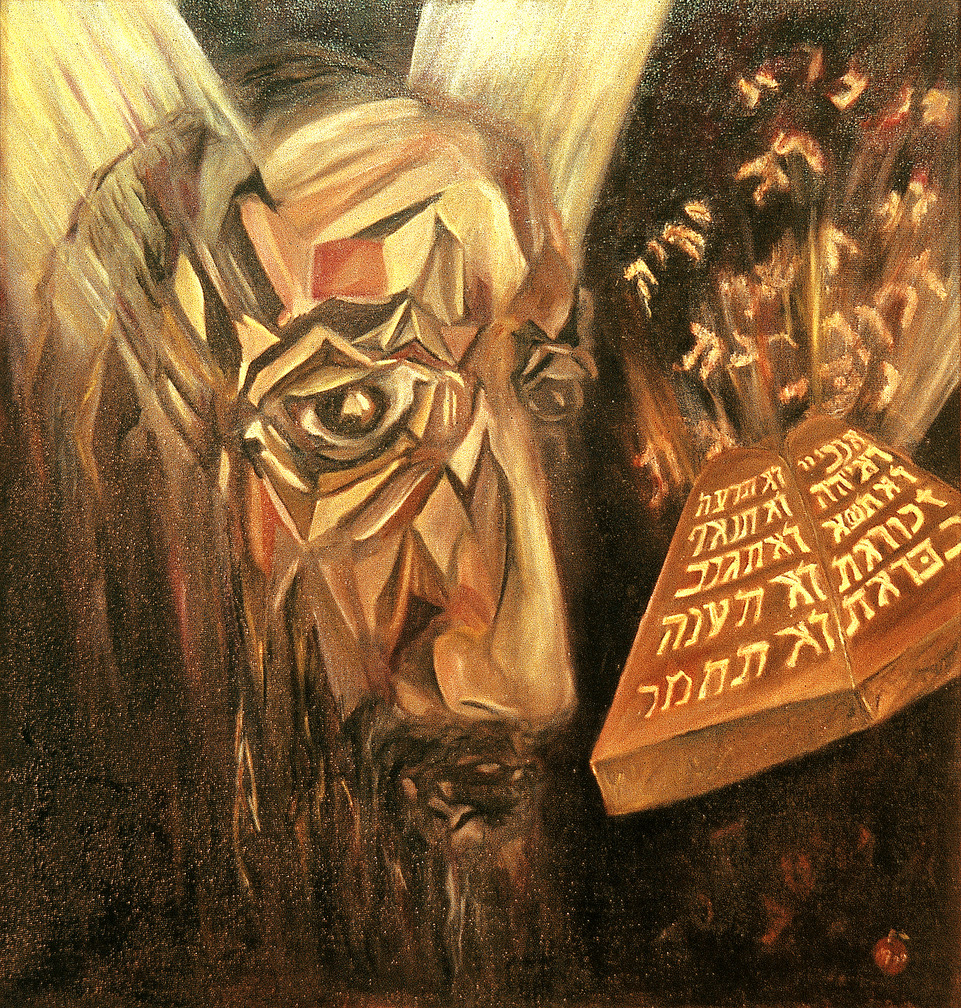 “In that dream , back in 1999, I saw Moshe Rabbeinu in such detail that it is engraved in my memory for good. I also saw the Hebrew letters as if made of fire, which were jumping off and up, from the Tablets”, Michael remembers.

As an artist, he had nothing more to do than to paint everything he saw, and he did it both devotedly and masterly. His Moses, the first personage from his Ushpitzim series and his Forefathers  project , started his existence as the object of art preceding the artist’s concept of the Ushpitzim.

This Moses is eternal, to me. He is first and foremost tormented, questing man, he is alive. And here, in this intellectual honesty of an artist, lies the essence of Michael’s creative power and his vision with regard to spiritual art. He does not beautify his and our nation’s heroes. He loves them and sees them also in their torment.

Spiritual art is a very tricky thing to do. An artist has so many visible and invisible hurdles in front of him in that department of arts. He should avoid kitsch and he should turn away from cliches and banalities. He is fighting a very powerful presence of the existing gallery of images.

In order to qualify as an artist, he should create something original , new and interesting , still bearing in mind a huge responsibility of interacting with reverend figures and legendary personalities. It is an extremely difficult task . Being an artist myself, I know that I , of many, simply would not dare to embark on such a direction of my work.

But my husband did, luckily for many of us, because he was able to create not just other portraits of eternal personalities, but he did it in a modern style which aesthetically responds to our perception of life today. He also filled his Ushpitzim works with a breath of life, vitally so. These Ushpitzim created today, in our time, between 1999 and 2020, are speaking to us effortlessly. They have a lot to say, and incredibly, they communicate with us in the language and the way which is natural and congenial to us. This essential quality which makes Michael’s Ushpitzim so special , I found simply amazing.

Not surprisingly, after creating Moses Michael started to think on creating the Patriarchs. That period of intense work when he created stunning images of Abraham and Isaac in a double portrait of Akedah ( 2001) followed by the great portrait of Jacob ( 2004) marked the completion of what Michael thought at the time as his Patriarchs series.

Michael’s Akedah is a timeless work of art. I do not know how he did dare to start to work on probably the most exploited plot in the history of art. Again, I would not dare to get into that territory, both so well known and so completely occupied. But he did – having his  deep personal understanding, and I would say bond with Abraham and Isaac in general and at that pivotal moment of faith. Looking back, it would be fair to say that Akedah is the episode in the Torah about which we both were thinking probably the most and the longest. How can one really understand – meaning to accept unacceptable – Akedah?  The mental process took years, and the same was probably with Michael’s inner artist’s work on his reading , his concept of perception of Akedah and its visualisation. 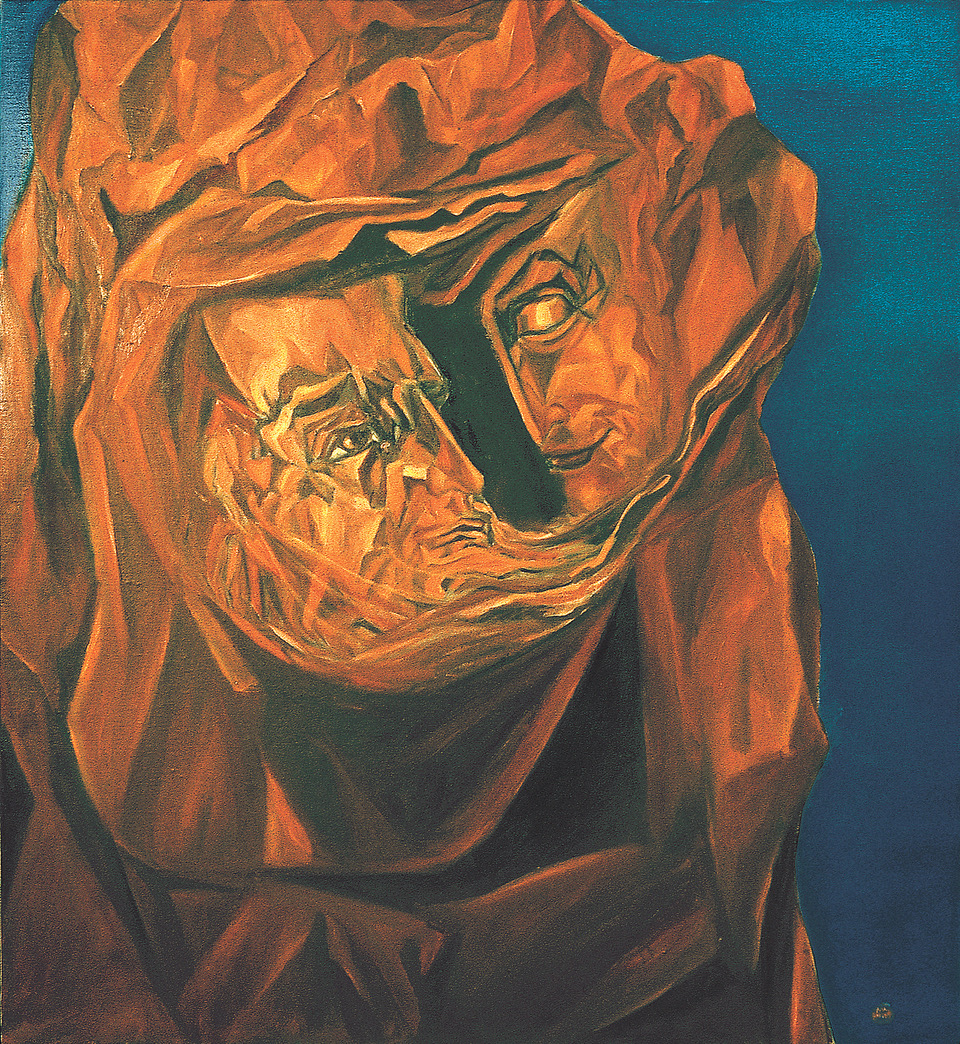 In Michael’s concept of Akedah, a father-con unity is predominant, and visually, it is achieved by one of the most striking images in the contemporary Biblical art. More about this work can be read here.

Several years after creating his own images of Abraham and Isaac, Michael was ready to create Jacob ( 2004). At that moment, the artist was still thinking that he was working on a small Patriarchs series. Michael’s Jacob is thoughtful, introvert-like, reflective – and with a good reason. 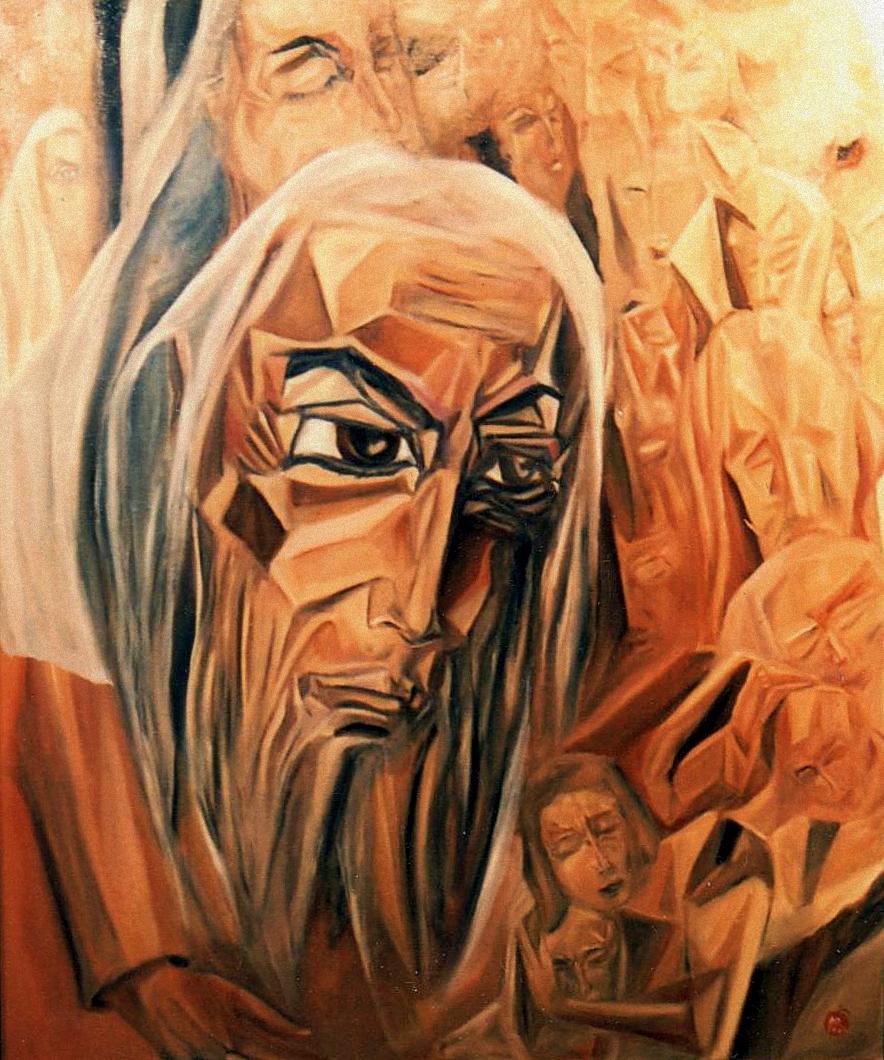 “As I can see it, being sent from his parents’ home abruptly, due to an emergency situation, and without a possibility to come back and to seeing his beloved parents ever since, Jacob was missing them greatly. I think he was thinking about his home, his parents, his life non-stop, at every stage of his extraordinarily dramatic life” – says the artist. And his last patriarch is an elegiac man who is thinking, remembering, reflecting non-stop. As Jacob did. How to visualise it and to present it to a modern day audience in the way that it would be accepted naturally? To me, this combination of sleek modern form, warm coloristic resolution, and fine thoughtful expression of the patriarch Jacob’s face in Michael’s fine portrait of him, resolves the goal: to visualise eternity in a modern and engaging way.

Chronologically, Michael’s large portrait of King David appeared shortly before he finished his Patriarchs mini-series with completion of the portrait of Patriarch Jacob.

Dealing with the pillars of Judaism , Michael worked very devotedly on the image of King David who is his favourite personality among our leaders along with Moshe Rabbeinu. The story of that very peculiar work created in 2003 is special and it will be told at the time.

Interestingly enough, Michael created his other King David , the image for his Ushpitzim, many years later, only in 2020. It is somehow special that he started what is now his complete Ushpitzim from his absolutely beloved Moshe Rabbeinu in 1999, and he completed the series with the image of his other beloved Jewish hero King David in 2020, spanning the work on the Ushpitzim for two decades.

Moses’s brother Aaron , the pillar of our Jewish faith, whom we both love deeply , appeared in Michael’s  series as soon as he realised and decided to create the visual gallery of all seven Uzhpitzim in their modern-day perception. From this point of view, it would be correct to mention that Aaron ( 2009) was Michael’s first decisively Ushpitzim in the series . 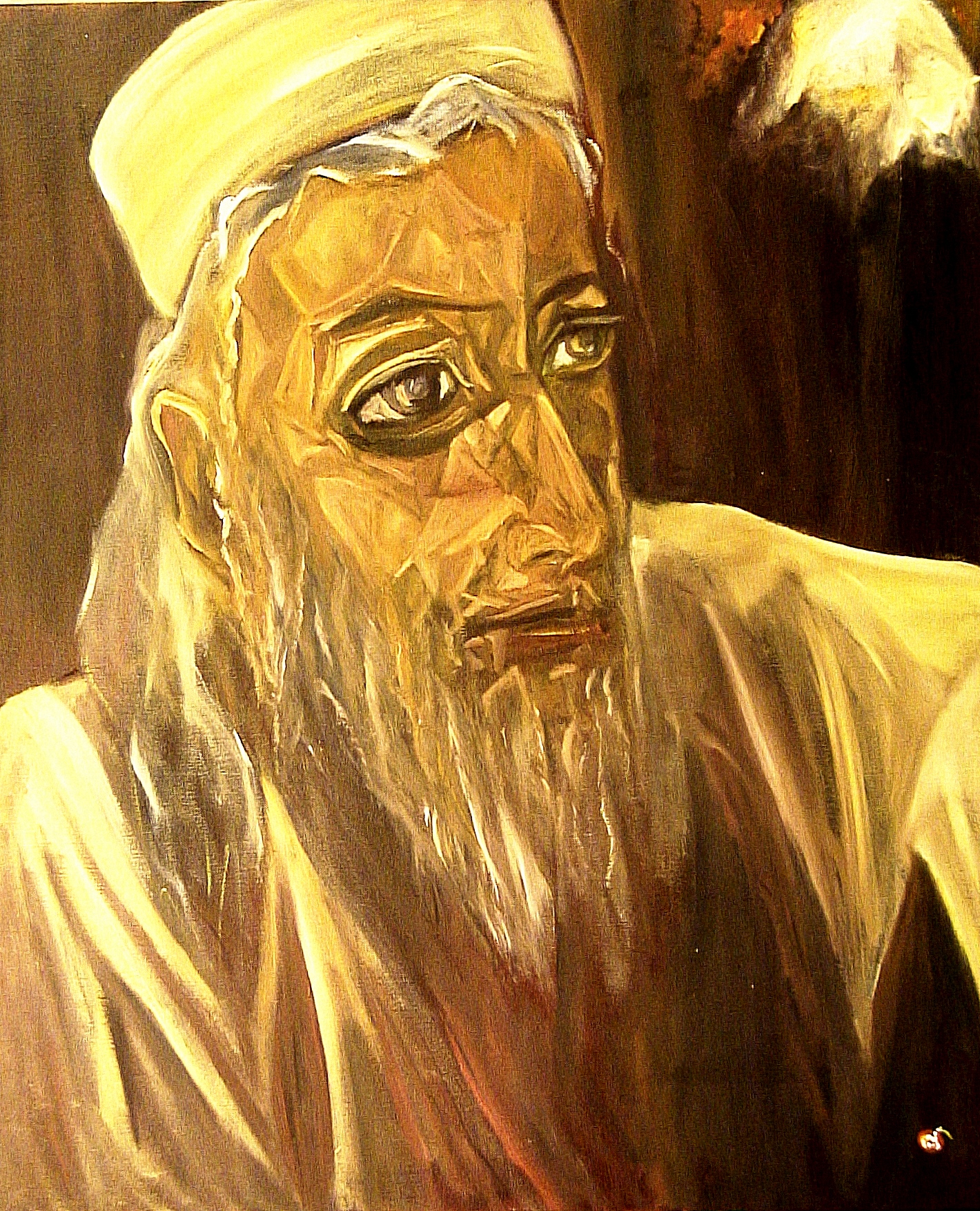 That Aaron is wonderful. Everyone who saw the work, fell in love with the person portrayed there – and it is the best in the Cohens, isn’t it? The best of them are elegant, bright, with an extra-dimension of creativity of mind and stern resilience in the most daring circumstances. As a daughter and granddaughter of Cohens, I know what I am talking about, first-hand.

But in the case of Aaron, our first Cohen and the first Cohen Gadol, he was supremely understanding. He was warm. He is superbly human. He infused into our people the best quality of applied humanism – does not matter what. And this Aaron looks at us from Michael’s amazing portrait of him created in 2009, projecting this eternal light onto anyone who ever saw that painting.

When, with completion of Aaron, Michael finally realised that instead of the Patriarchs mini-series, he is actually working on a full-scale Ushpitzim, his next work was Joseph, our both’ beloved son of Jacob, the most tragic and at the same time the most brilliant character in the entire Biblical narrative, as we can see it. This dualism of tragedy and brilliance exemplified in Joseph actually applies to Jewish psychological archetypes in general. Was Joseph a protagonist of our dualistic character when drama wraps talent, and brilliance shines even in our tears? Quite possibly so. 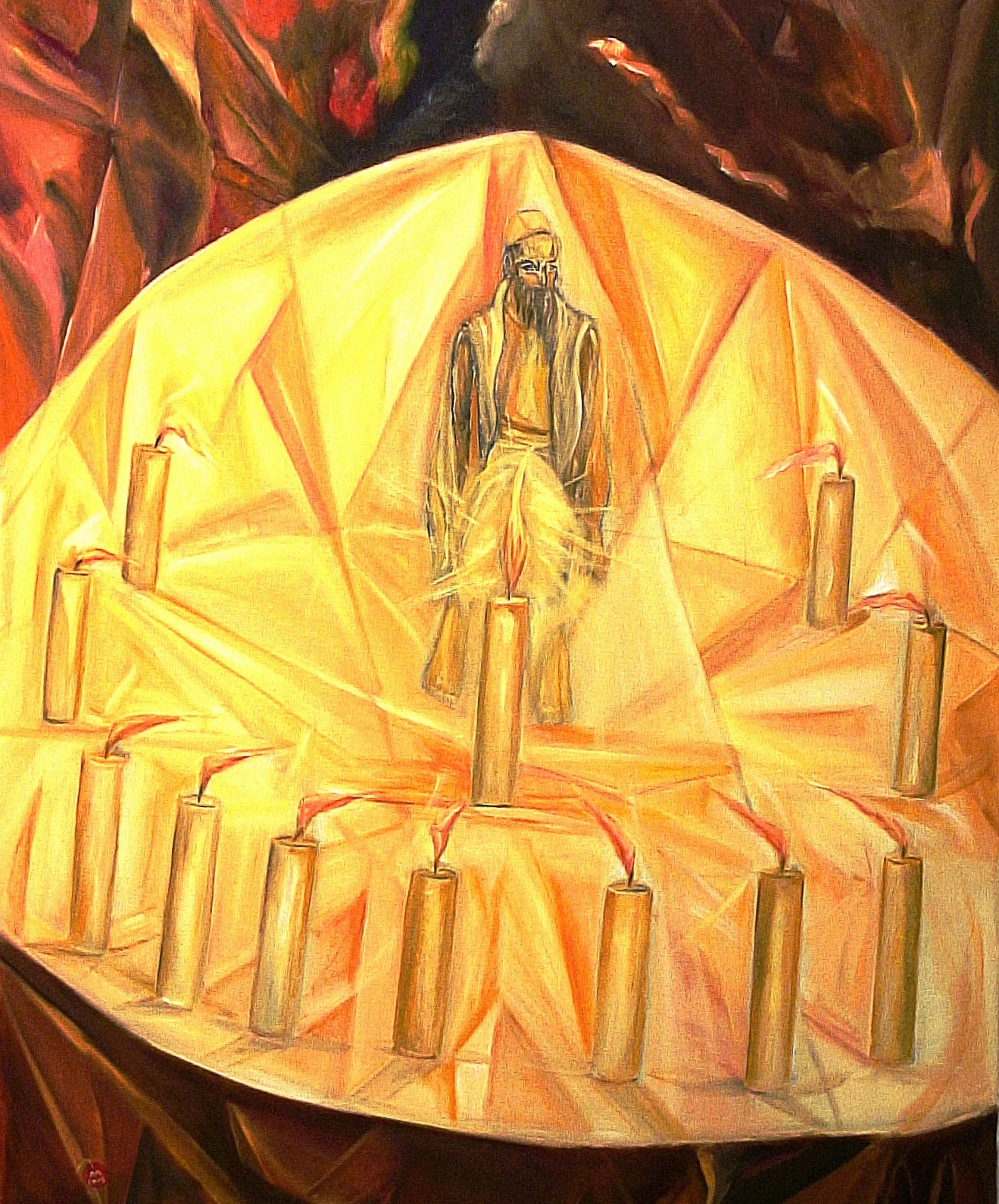 Michael’s Joseph shines, but not effortlessly. His shine is due to his golden wise heart and it comes despite anything he came to live through and overcome, Quand Meme as they say about the motto in France. But it is Joseph’s shine that did help everyone around him, his family, our people, and everyone to whom he did not hesitate to help. The brilliance of conviction, and the conviction in good and light is the engine of our Jewish history and is the secret of our astonishing survival. All this is transparent in Michael’s portrait of Joseph.

Twenty years after he started to work on the leaders of the Jewish nation, Michael finally created the seventh Ushpitzim, his lyrical King David ( 2020). In contrast to the five  preceding Ushpitzhim ( except Isaac who was young enough at the time of Akedah) who are all wise men in a mature age,  his King David is emphatically young – and youthful, in heart, acting and inspiration. 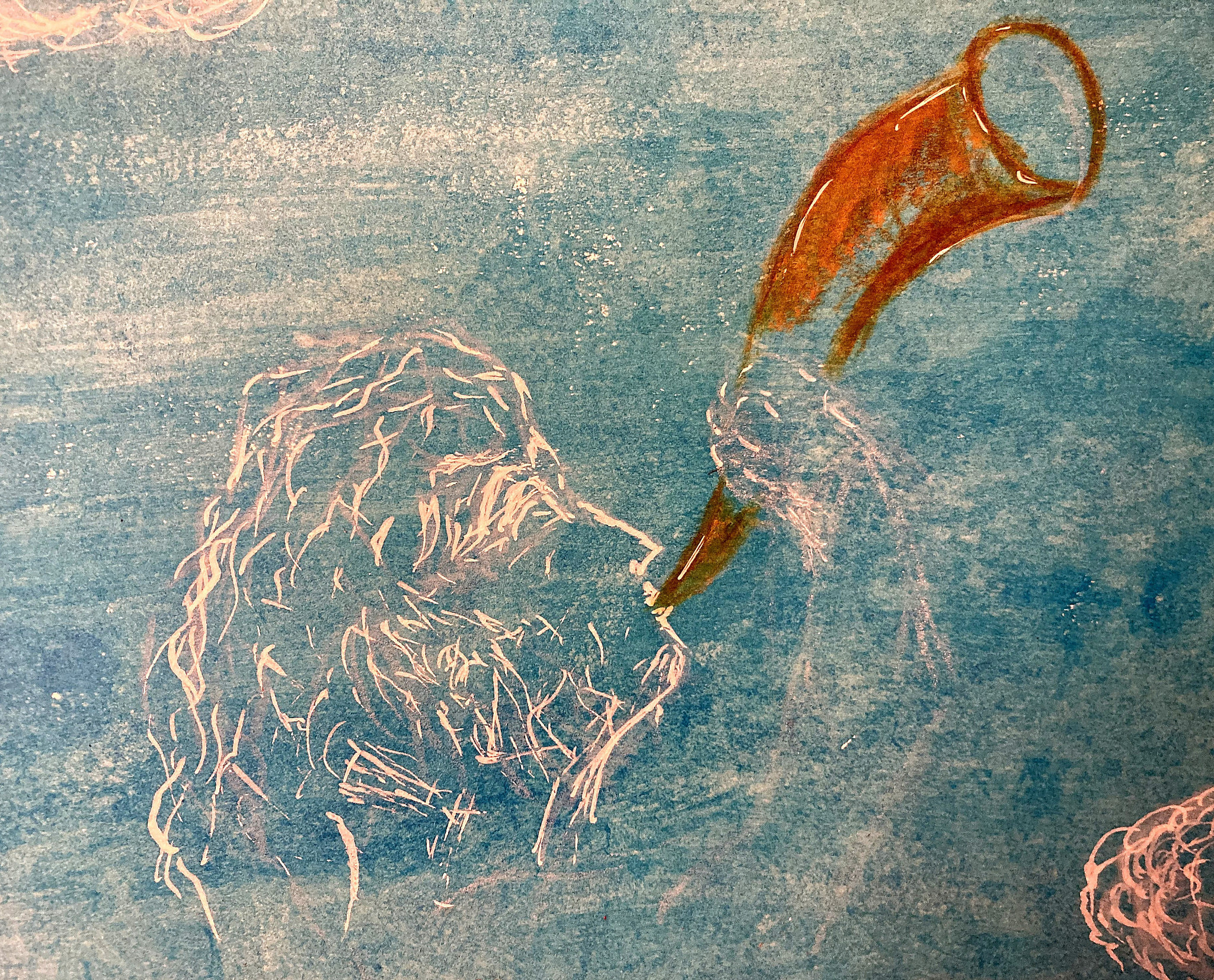 This work is titled as King David’s Shofar, and this shofar is the shofar of Jewish people. Everything in this work is uplifting: its young protagonist, his movement, the inspiration his sounding shofar brings, the coloristic resolution, even the medium which is very fine and light.

It is quite interesting to observe this evolution in the artist’s line of Ushpizim created in twenty years’ path: from thoughtful, reflecting, dramatic Moses, Abraham, and Jacob through enlightening and warming Aaron and Joseph to youthful, aspiring and inspiring King David in his youth. It is obvious that this evolution also reflects the inner world of the artist. And his works are very interesting, deep, living testimony of the way of Jewish person in the world of arts, culture, history, morality and humanity which all speak to us from the works of real art and which a lot of work and inner effort makes art soulful.