Jerusalem in the works of Michael and Inna Rogatchi

First published in The Times of Israel – https://blogs.timesofisrael.com/the-feeling-of-jerusalem-artistic-perspective/, as well as in Tribune Juive ( Paris, France) and The Jerusalem Connection Report ( Washington, D.C., the USA)

When examining the stones of Jerusalem, one can get as close as it gets, to the real understanding of what the Lurianic teaching means when it says that stones have their own soul, too. Stones accumulate the energy of people and their emotions throughout the time. This energy does not disappear. It stays in stones. And never deeper than in the stones of Jerusalem.

In the Temple Tunnel, there is one particular, very special place, archeological sensation. I never saw anything like it in the world. In the same hall called as Hall of Epochs by the Temple Heritage Foundation, there are physical stones, architectural details, and artefacts from five epochs: the floor and from the period of the First Temple, the stones from the Second Temple period; a column and pillars from the Hellenistic time; the arches from the Hasmonean period; and corridors from the Roman  rule time, – all of it in the same physical space of not that large hall.

Jerusalem, My Stones art video essay which includes my art photography and collages and some of my husband Michael Rogatchi’s paintings, is dedicated to all Jerusalemites, those who are physically in the Holy City and those who hold it in their hearts.

When the Silver Thread becomes the Golden Bowl

Bar-Mitzvah ceremonies for Jewish boys are organised regularly in the Tunnel today by the Temple Heritage Foundation. Significantly, many of those boys are orphans and from underprivileged families. This is what I call the Silver Thread – or the Silver Cord as it often translated from Ecclesiastes  – “Remember Him before the silver cord is broken  (and the golden bowl is crushed, the pitcher by the well is shattered and the wheel at the cistern is crushed), (Ecclesiastes 12:6).

I find it very symbolic that there has been only one documented episode in the entire Jewish-Arab history where there was Arab and Jewish unification on a certain issue. What was the issue? Back in the early 20th century, between 1907 and 1914, there were scandalous and farcical escapades of British aristocrats led by Monty Parker, to excavate in the heart of Jerusalem to recover nothing less than the Ark of the Covenant. They efficiently bribed the Turkish officials who were administering Jerusalem, and they went for unauthorised excavations hiding what they were doing in the most hilarious way. When word went out that the Brits were after the Ark, Jews and Arabs of Jerusalem united in fierce riots against the illegal doings of Monty Parker’s ‘brigade’ and made him flee for his life.

At the junction where Muslim Quarter comes to Temple Plaza, there is another remarkable place, the Ohel Yitzhak Synagogue, which was destroyed by Jordan to its foundation – the same as the Hurva synagogue was  – in 1948, and which had been restored in mid-2010s. The synagogue which formerly was the Synagogue of Hungarian Jewry and was built in 1870s and now it is back to life, is very light, gracious and beautiful . Just before it was re-opened in mid- 2010s, we saw the IDF soldiers with their officers there with some of them able to pray at the quiet and inviting place. This is how the Ecclesiastic Silver Thread is becoming the Golden Bowl – without cracks. 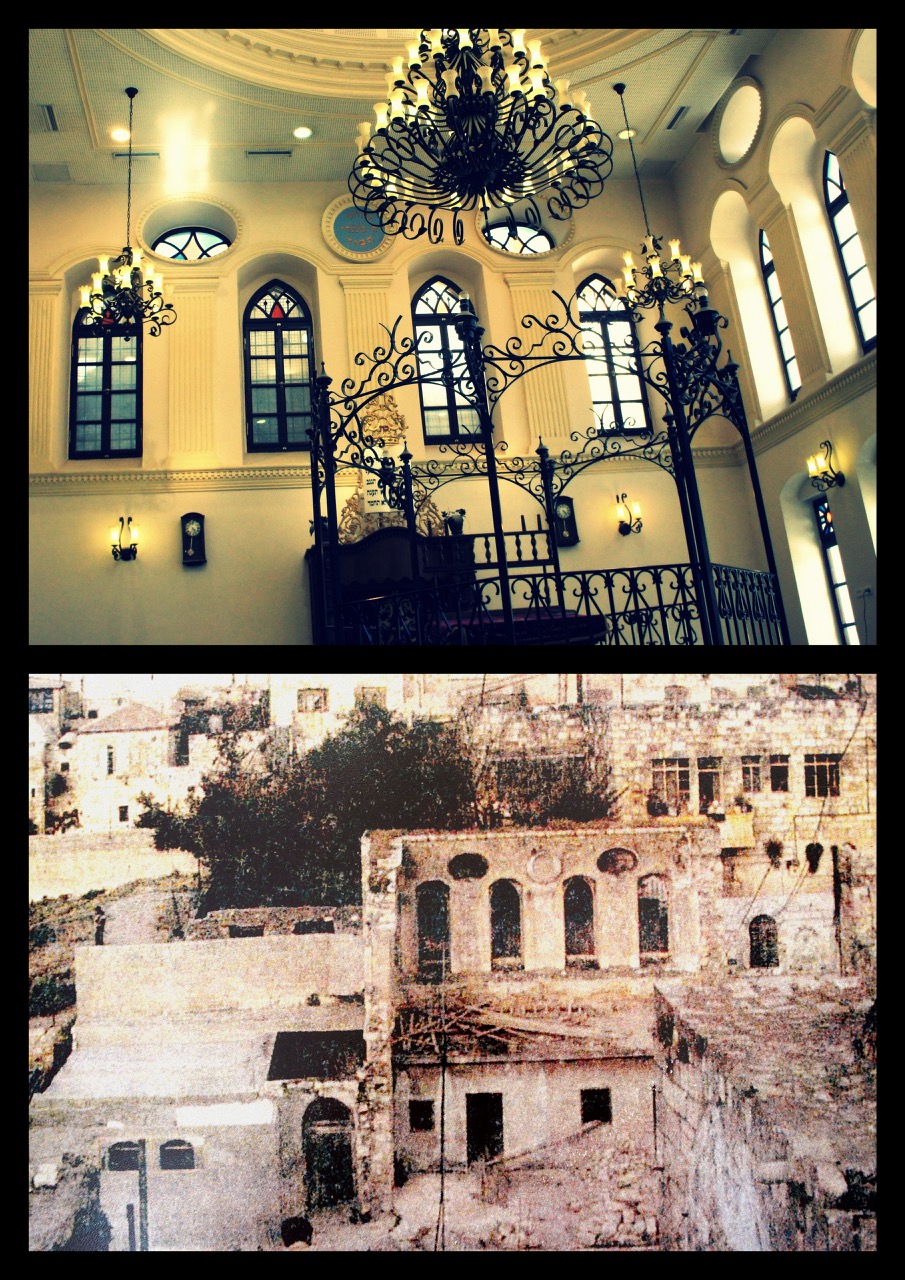 The energy of these stones has provided the nourishment for many generations of the Jewish people, for all those who keep Jerusalem in their hearts as the nucleus of their universe.

There is no other sensation in the world like the one felt when one’s hand is touching those warm, wise stones, the stones which are speaking to you, one to one. 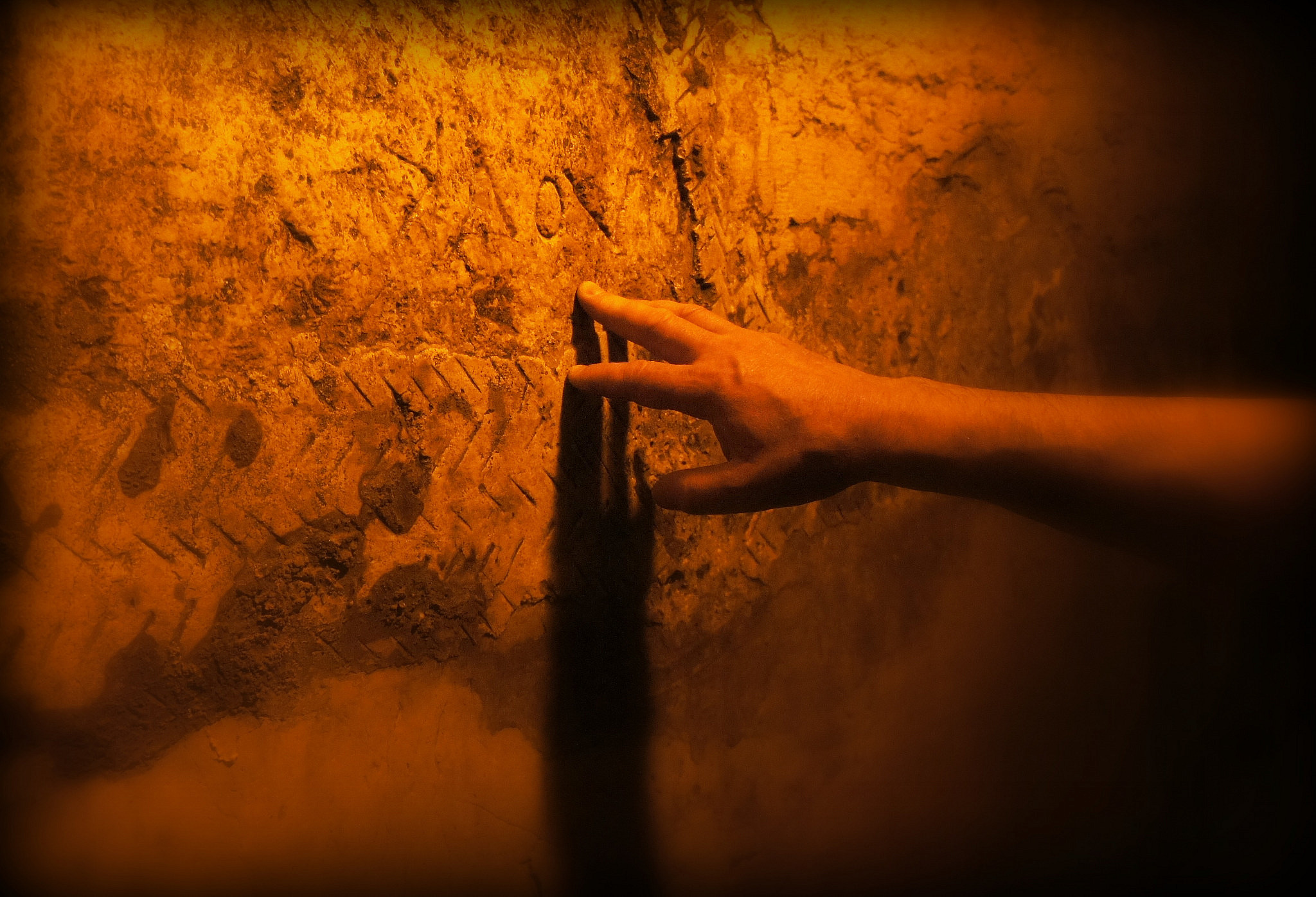 When we had visited Jerusalem for the first time in the  beginning of the 1990s, we were trembling in excitement and disbelief at being on Israeli soil.

The most powerful sensation that I’ve had at the time was losing the sense of time. I felt as if the city had been kept above the earth and held upward by a superior power. It was a very distinct magnetism, gentle, but extremely firm. Most importantly, time has no power over it. I also was stricken by the the gentleness of the air around us, that unique Jerusalem gaze, those tones of gentle blue and rose and shimmering beige being melted into that one and only aired, flying colour of Jerusalem. If colours can fly, it happens at this very place.

The Feeling of Jerusalem is the sort of a sensation which transforms into conviction.

As a matter of fact, Jerusalem, to me, has never been a city – it is the Place. The unique, blessed Place of unparalleled, re-assuring power and magnetism. The source of strength and hope. The place which is upheld by the ultimate power. The Talmud provides a straightforward explanation for this: “Eternity – this refers to Jerusalem” ( Berachot 58a). 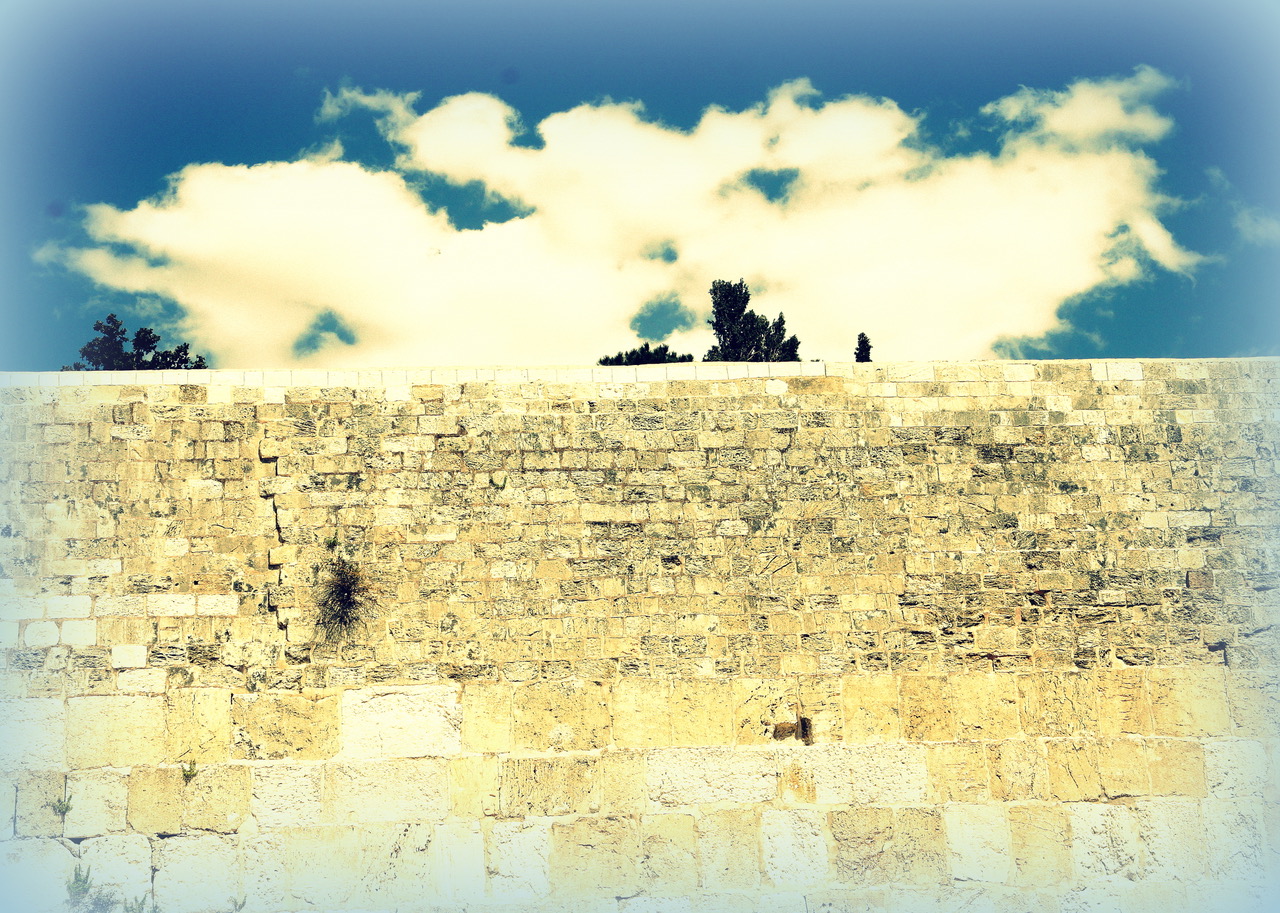 The Wonders of the Tunnels

Later on, exploring the Temple Tunnel, we were extremely privileged to be at the place which is just ninety metres from the Holy of Holies. The place which is the holiest one for the Jewish observant people, is quite simple but appropriately adorned. It is a place for praying, with many praying books around, a few chairs, and a couple of rows of seats. Everything there is unpretentiously gracious and just incredibly calm.

I always think that we, people, are so small staying next to the solid parts of the Wall which are 55 and 45 thousand tons of weight each, correspondingly. But as small as we are next to these stones, we do feel their warmth – which is wondrous given the fact that they are staying erect from the Second Temple period, and are under the level of earth for thousands of years by now.

In the Tunnel, one can also see the place where the Kotel really ends, and one realises, happily, that the Kotel – and our strength emanated and sustained by it –  is substantially longer than the visible part, those precious 87,5 metres of the Wall at the Temple Plaza today. 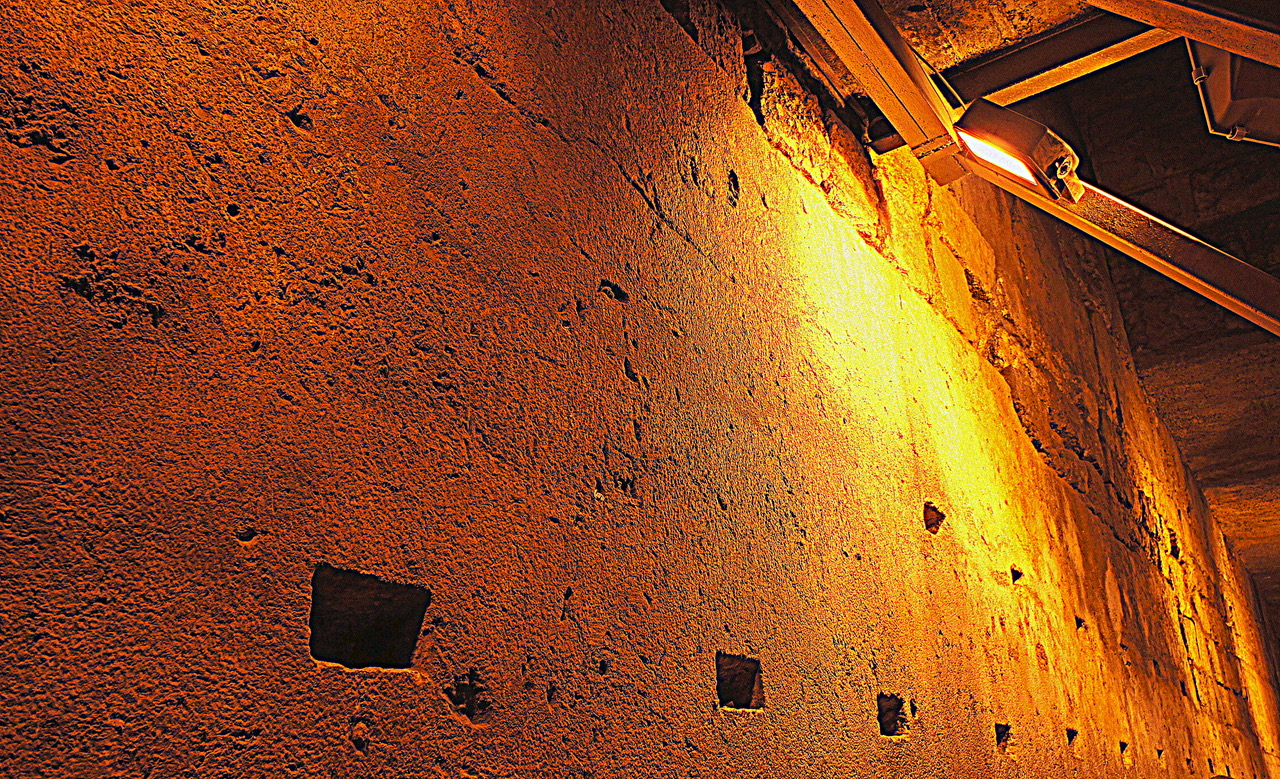 Among the wonders of the Tunnel, we can also see the part of the authentic, original street from the Second Temple period, – and one just close of losing one’s mind trying to comprehend that we are able to touch and to be present among the stones which were witnessing and were the part of life in Jerusalem at the time of the Second Temple.

The Oleh Yitzhak Synagogue re-birth story was preceded by the well known Hurva Synagogue, a crown of the Hurva Square today.  After the date of its completed restoration in 2010, it is almost impossible to imagine that  this central place of the Old City once looked very different. Additionally, the Hurva story was particularly painful as it was the largest Ashkenazi synagogue in Jerusalem. 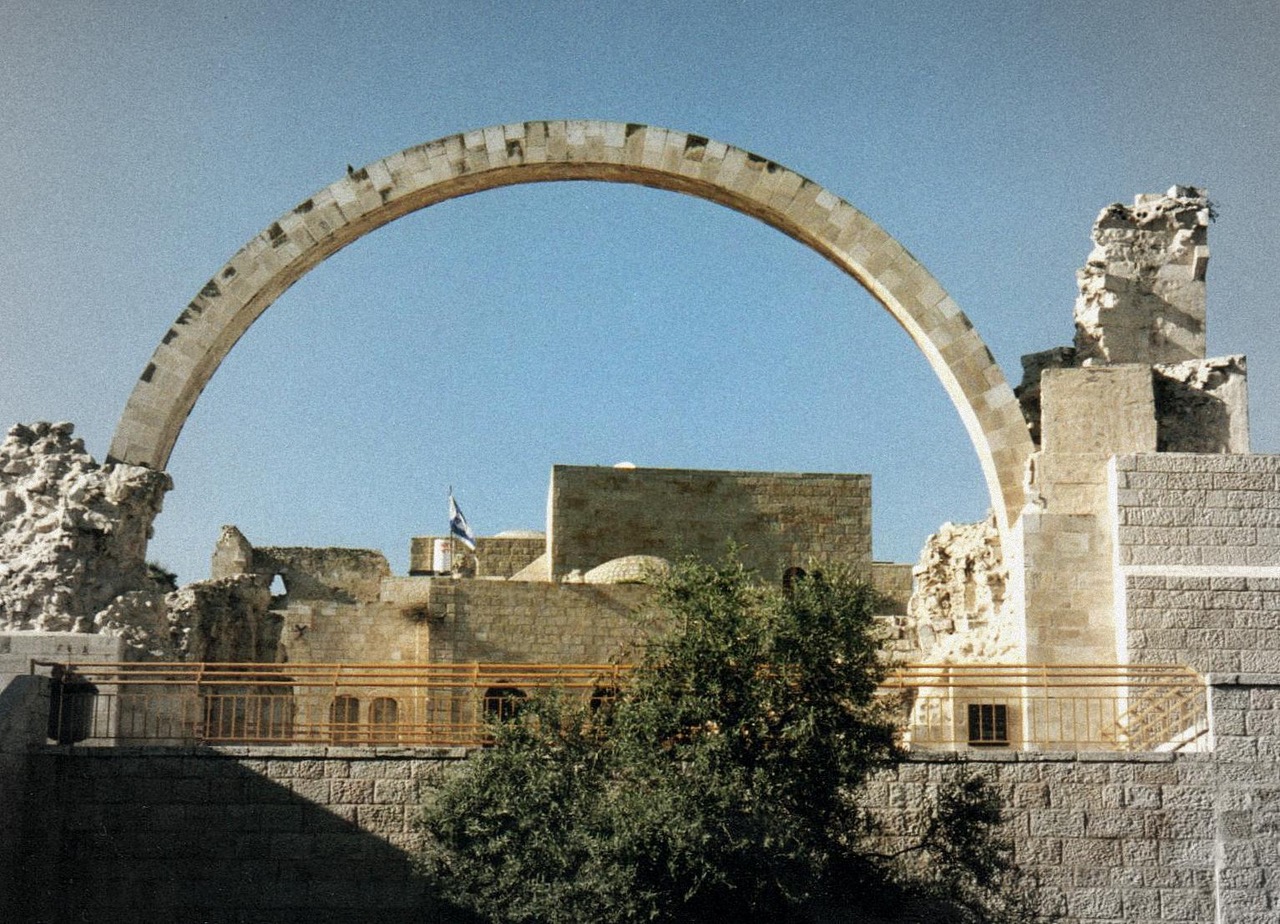 But when it comes to Jerusalem, there is something particular even in despair. In the early 1990s, the Hurva’s only surviving arch jumped into my husband’s and my hearts and stayed there. There are symbols like that in one’s life. Despite all the sorrow, that very arch meant our bridge to Jerusalem, for both of us. Reflecting this tangible bridge, Michael painted his so very special My Stones.Jerusalem painting which belongs to the Permanent Art Collection of the Municipality of Jerusalem, alongside famous works of Chagall and other great Jewish masters who did love Israel and Jerusalem with all their heart. 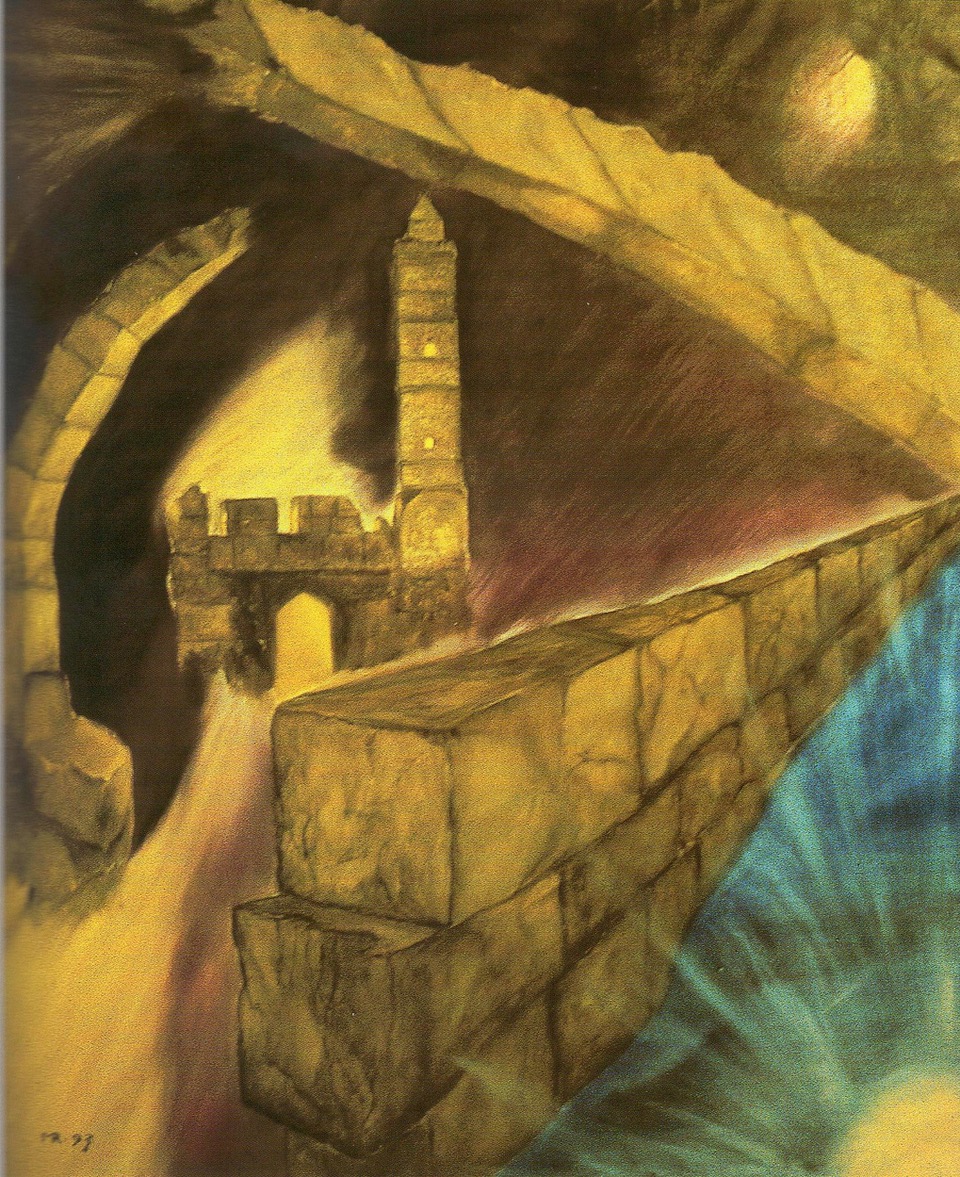 Seventeen years after the completion of Michael’s work, Hurva Synagogue was restored. And then we united our artistic efforts and our love for Jerusalem and its spiritual treasures, and have created a special art collage, existing in the only copy. In that work, the ruins and the Arch of Hurva painted by Michael are merged with my artistic photograph of the Hurva restored. The piece is entitled Hurva Return, and we have presented the work to the outstanding Rabbi Shmuel Kaminetzki who was an instrumental figure in making the restoration of Hurva possible. 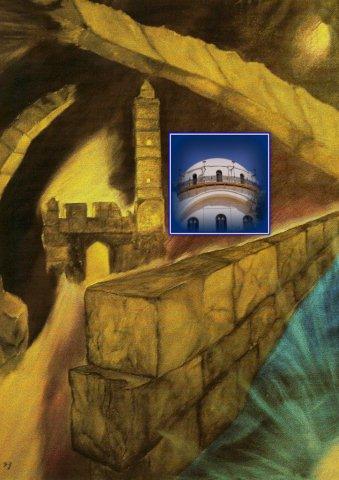 With Jerusalem in heart in the desert of Gulag

Our generation is lucky to remember the Day in 1967 when it had happened, when historic justice prevailed due to human courage and commitment.

My husband will never forget when Jews exiled to the Soviet Gulag who were listening to the Voice of America secretly, risking their lives, were coming out to the streets in Kazakhstan crying out of joy “We’ve made the victory! We won! Jerusalem is ours, back again!”  ‘We’ – were crying with joy Jews exiled in nobody’s land. Many of us have been sharing their joy every year since Iyar 28, 1967 all over the world.

When many years and decades later, Michael was approached by the Jerusalem culture authorities with an idea to create a special collection of his works dedicated to the city, he worked with love and joy. Some of these works are the part of his special Zion Waltz series of exuberant paintings created in 2015-2017. 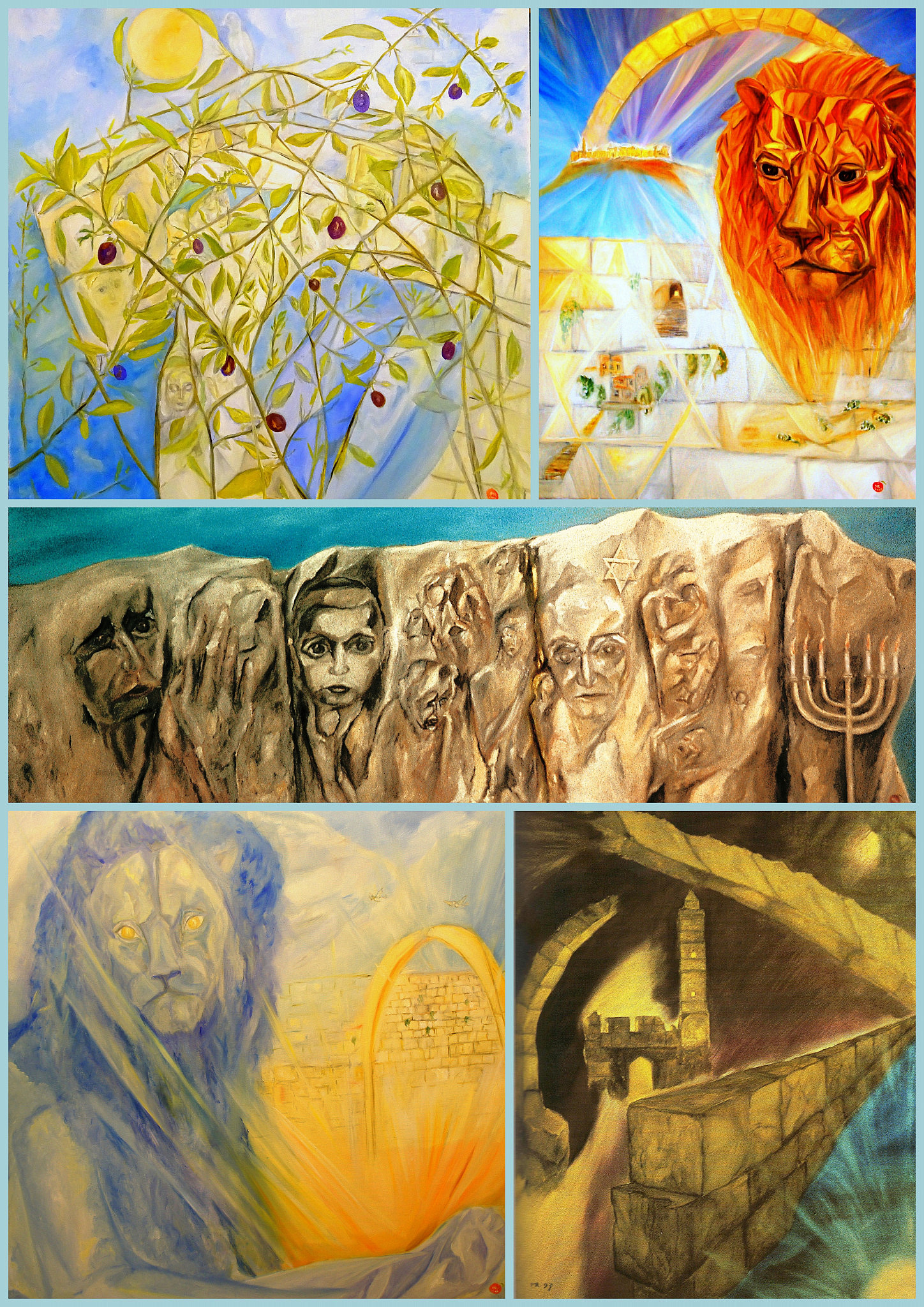 It is interesting to observe the transformation of feeling of Jerusalem in the artist’s heart: from painful, dramatic unsettling in Michael’s visioning of the Kotel as the essence of the Jewish history of suffering in his Portrait of the Kotel ( 1999) to the airy, flying, gentle Under the Skies of Jerusalem in 2016. In between those drama versus flight point, there are two depictions of the Lion of Judah, created by Michael with an 8 years gap, his shining  Lion created in 2008, and his soothing one created eight years later, in the work called Strength of Love ( 2016). The interesting and telling detail in the both works is the thoughtfulness of the Lion. The determination of love defending the essence of Judaism and the heart of Jewish nation in the second work is  pretty clear manifestation of the artist’s thoughts.

My heart aches every time I pass the house where Israel patriots were hiding while fighting in the underground in 1948. My heart jumps every time when I am privileged to hear our Psalms at the Great Synagogue with its magnificent choir led by Ellie Jaffe. My heart stops when I feel the gentle but powerful push of the wind at every Shabbat we start at the Wall. That push of that wind signals us that the people of the nation are heard.

And I am thinking of Bella Chagall who was willing ‘to embrace the whole Jerusalem’ when she was a five years old child sitting with her family in Vitebsk, thousands of miles from it, – but knowing by her heart, the heart of a Jewish child, what Jerusalem is about.

Thirty years passed since my first acquaintance with Jerusalem, and our life has been stuffed with events. But I still remember and do feel the sensation of my personal discovering of Jerusalem  three decades ago as if it was happening today.  Probably, it was the main discovery in my entire life. 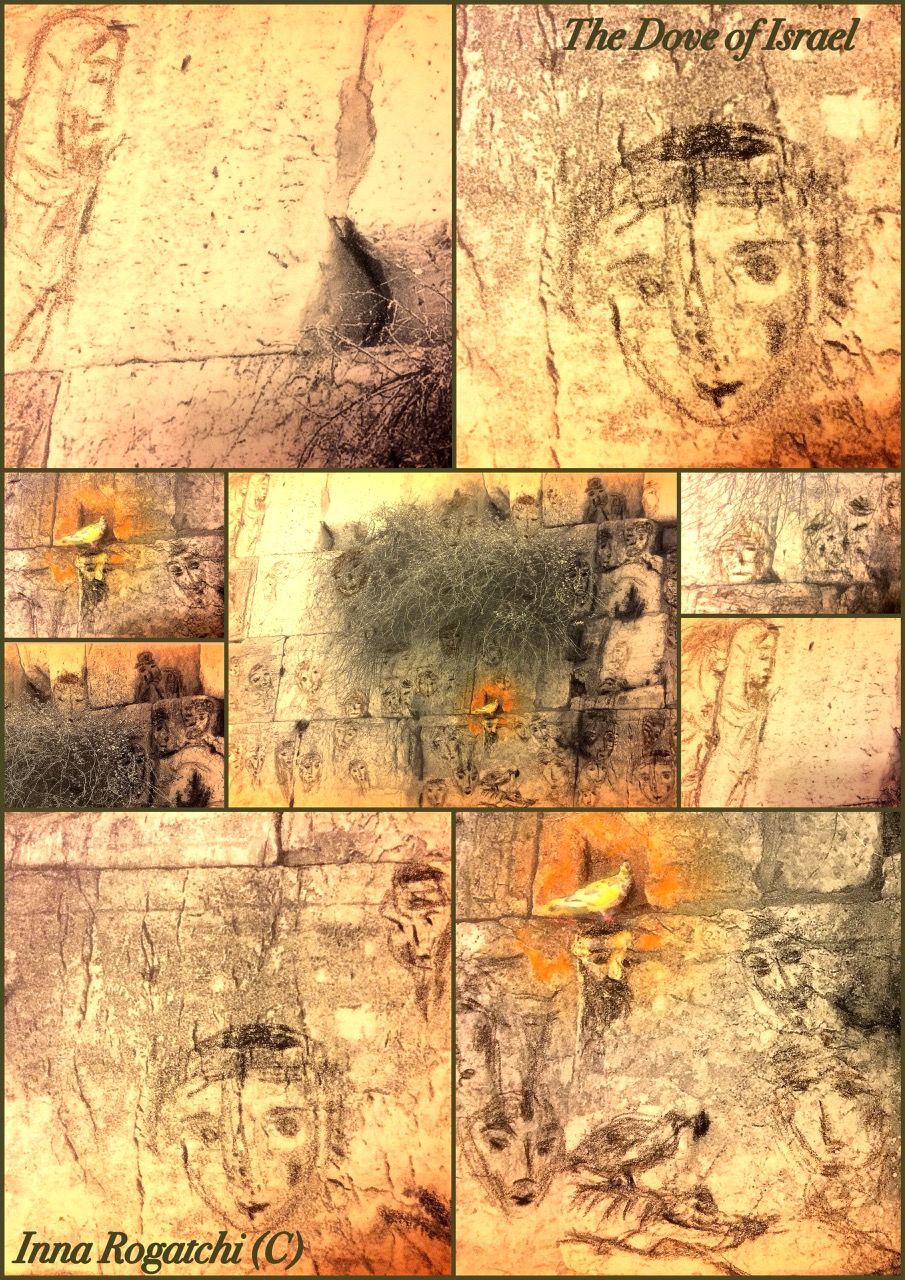 The Talmud provides the insight into the secret of the Kotel: according to it, there is a mirrored image of the Temple in the Heaven, and that entity keeps the Wall standing, no matter what occurs. Yet more importantly, it transcends the Presence. This presence is felt by anyone who ever visited the Kotel, even the most self-convinced atheists.

For those who are not, in the beginning and in the end of the day, Jerusalem is the only place in this world where a person can talk with the Creator directly.