Michael’s Dance painting ( 1995) created in the same period that his Freilax has won him the place among the finalists of the highly prestigious and professionally demanding British National Art Award in a very tough competition conducted by the world renowned Ben Uri Society in London, and was exhibited widely internationally. Every time it is hanged on the wall of any exhibition hall in the UK, Italy, Israel or any other place, it stands out . 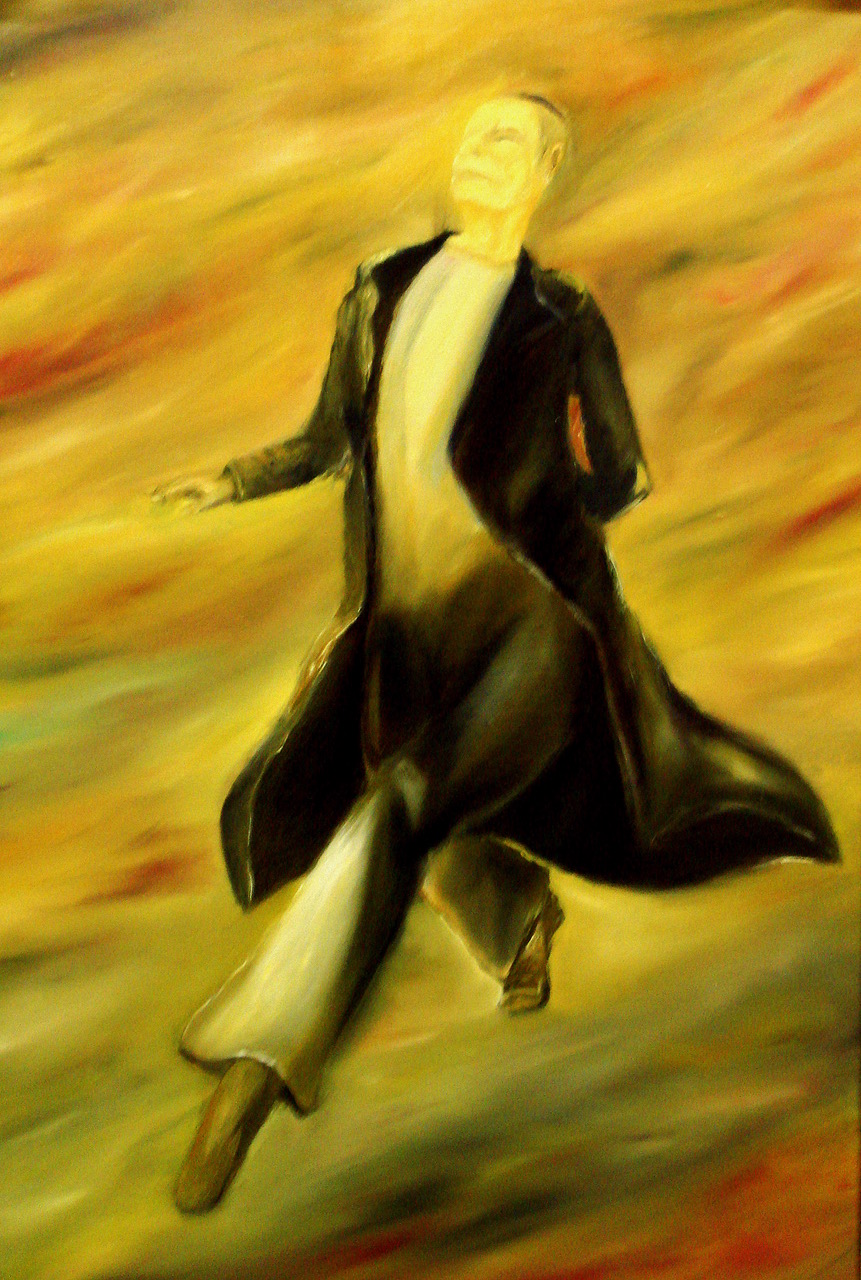 So many times we were hearing amazed feedbacks of the people who were as if feeling that dance almost as real one. The work is close in the time of its creation to Freilax and has a similar warm atmosphere and the coloristic of that complex Jewish cosmos, with all its dark elements inevitably present due to the course of our history, and also due to the challenges of our lives in any given generation. But still, our Jewish atmosphere is keeping us by its warmth, its humanity, its comfort of common memories, experience, and values.

It is only in this kind of weaved by kindness world, a person can dance in the way Michael’s Jewish dancer does: by flying. To me, the most important element in this special figure is his emphatically erected back, with one hand behind it, and the pose of his straight up  head.  This is the pose of Mordechai who would not even think about bowing down any Haman on his way. The grace and self-respect of this canonic by now figure of the Jewish man dancing with his flying heart has become the one of the most important, most personal, and most beautiful statements of the artist in his entire Jewish-themed oeuvre.

In the ocean of imaginary of Jewish musicians and dancers in the visual art, it is not easy to create original characters. Michael Rogatchi opted to resolve this challenge by addressing the aspect of universality of multi-centuried  Jewish experience and its emotional expression by placing his playing, singing and dancing heroes in the abstracted space of our common accommodated experience throughout our painful, but so bottomlessly humane history, and settling his figures with flying heart in the space of encompassing devotion, portraying the essence of Jewish character at the time of its pure emotional peaks – such as at the time of Purim, the time of victory of our spirit. 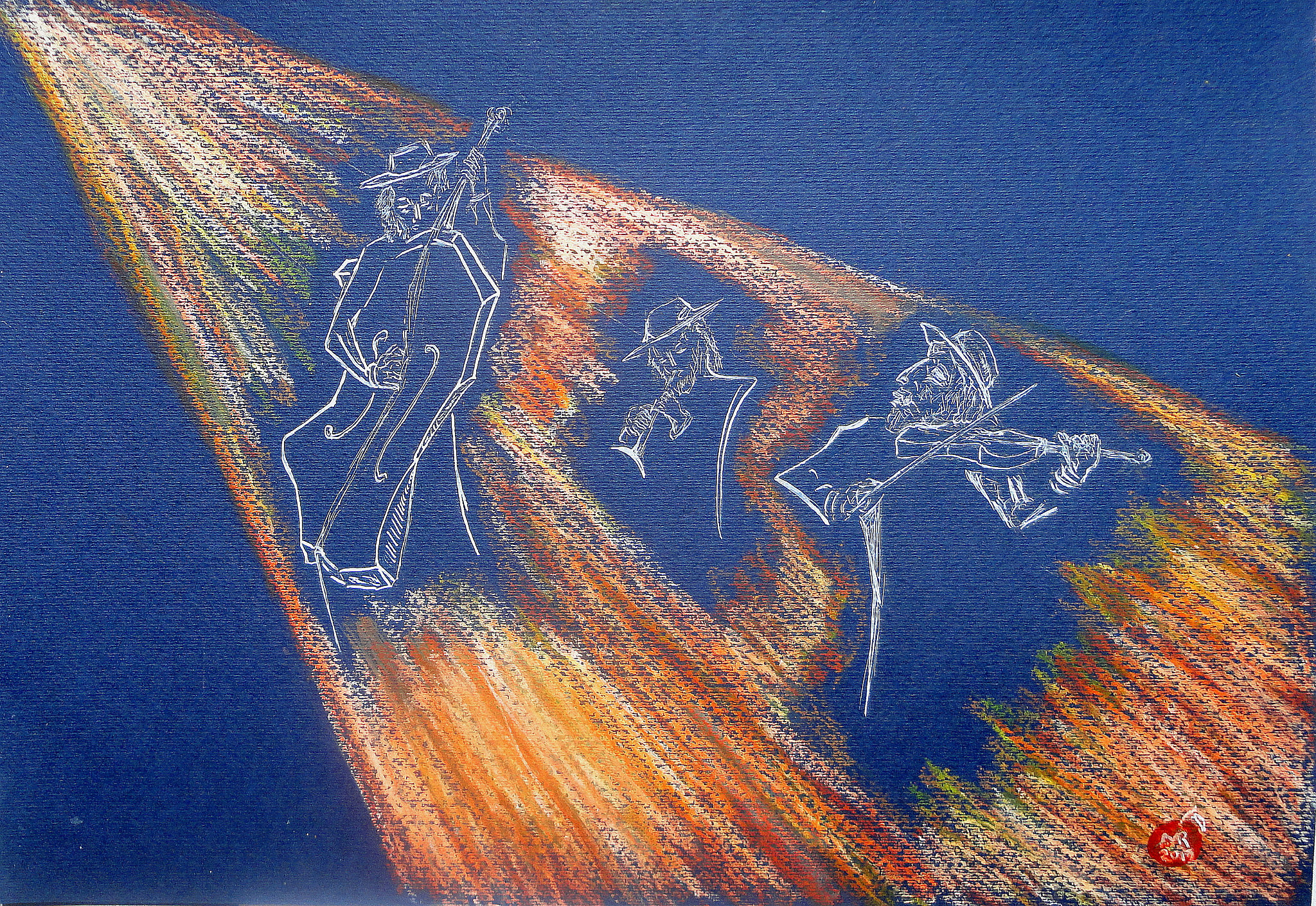 The 5th century BCE? Absolutely. And ever after, a year after another, living through our history, our memory,  our terror and our relief, our tears and our joy. Guided by miracles, in an unique mode of survival in human experience. Being carried on in our joyful dance by the warmth of our families. Being sustained in our life journey by the warmth of our homes.  Keeping hands with our people, including those who live in our memory now. Celebrating with a flying heart.

The Joy of Purim in Michael Rogatchi’s Art

In Jewish tradition, we have ten major holidays annually, with only two of them, Simcha Torah and Purim, is about exalted joy. And on Purim, that joy comes after miraculous rescue from a mortal danger and prospect of total extinction.

Many of us knew in generations that our Jewish joy is so often a joy mixed with tears, so often it contains an essential drama in it. We are genetically aware of the complexity of our joy, and many of us, also in generations, value it as a more precious gift in our lives, the same as it was known in our families and went back by generations.

And of course, the Jewish history, as the history of one big family, imprinted in our common psyche all these special marks of so many of our holidays made us to hold our breath, to pray ( including non-believers), and to have yet another layer of trials pushed onto us by those who toyed with an idea about world without Jews.

Of many and many terrible ‘specific-date’ pointed executions of Jews in Europe during the Holocaust, a horrific mass murder of over 5 000 men, women and children, with prevailing number of children there, many of them buried alive, in the Minsk Ghetto on March 2nd, 1942, on Purim, stands apart in its volume and cruelty.

Of all Jewish holidays, for some reason, Hitler and some close to him butchers were obsessed with Purim of all ten of our holidays. From the fierce ban of Purim from 1938 onward by Hitler personally, through repeated return to the theme of Purim in particular in his speeches during WWII, highlighted  by his hysterical warning in an important radio-broadcast in January 1944, when he started to realise that he was losing big. What was  on his devilish mind? That  the Jews ‘could celebrate their second triumphant Purim festival!’ When a psycho is in a panic, he turns a seer.

And of course, that most striking sample of Purim’s miracle in our times when ten of modern-time sons of Haman, in capacity of highest the Third Reich officials, were hanged in October 1946 after the Nuremberg Trial, with the eleventh of  those convicted to this punishment, Hermann Göring, committing suicide, in an incredible parallel to what has happened to the Haman’s daughter, the eleventh from his and his wife’s children of that vile family.  That’s why the episode of the ten top-Nazis’ hanging in 1946 is marked in history for good by the terrified scream of one of them, Julius Streicher, the notorious publisher of Der Sturmer and the evil who personally ordered destruction of the Great Synagogue of Nuremberg in the Kristallnacht pogrom. When Streicher got on the platform just before being hanged, he screamed  “Purimfest!” . Indeed, it was – and the day, October 16, 1946, was actually Hoshana Rabbah, the day of final judgement in a Jewish year. I always wished so much that Hitler was next to them on that platform on that day. And so many others, as a matter of fact who never got their punishment.

Hamentashem’s scent of victory and belonging

On a personal note and recollections, in our Jewish families, every year, with no failures, so much of that special, gift-like, hopeful joy was brought with every Purim, despite often close-to-impossible circumstances of life of the Soviet Jewry in post-Holocaust life.

Before the blossoming, larger-than-life Pesach celebration, our grandmothers were so very happy to bake hamentashems, every time with joy, that special joy of defiance, stoicism, belonging. I still remember the shape of my grandmother’s hamentashems and their taste. Most importantly, I vividly remember her smiles while she was baking them for a large enough family. My grandmother Adel Chigrinsky-Elovich, the niece of a treasurer of a huge Ekaterinoslav Jewish community with 96 synagogues in the city built by Catherine the Great as the third capital of her empire, and the daughter of Meir Chigrinsky, the person who saved that huge community of famine in the 1930s, was a limitlessly kind person. She was easy-going, warm, soft, a beauty, a fun, an able musician, and a cook extraordinaire. No wonder that her rare transformations into a steel-like, determined and absolutely off any compromise personality, always impressed me greatly. A few times in life that I saw my ever-singing grandma like that, were always about the same: self-traitors, Jews who decided to convert. The feeling of belonging in my grandmother’s world was paramount. Does not matter what.

The smell of Purim in our home was the smell of hope and smell of victory. Can a professional writer successfully describe these kinds of scents that were filling the houses of the people who were prevented by the tough and utterly unfriendly regime from using the word ‘Jew’, not to say practise Judaism? It is  a hard mission to accomplish.

But we are lucky to have other means of expression in our family’s creative arsenal. My husband Michael’s large and devoted Jewish family was also Purim-tuned always, despite being pushed to live in the harsh circumstances of exile in Kazakhstan. With years distancing us from the reality which sometimes seems not that real, we are thinking on what kind of feast a few hamentashems must have been in the homes of the people where dinner sometimes consisted of a piece of rye bread, an onion, and some sunflower oil, and where herrings added to that list, was regarded as delicacy. And there had been always hamentashems, for all large  Michael’s family, does not matter what. Miracle? Dreaming? Belonging.

And still, they danced, they sang, they played our great music, with every accord, every move, and every breath celebrating this unique joy. The joy of flying Jewish heart – especially on Purim, of all ten of our annual celebrations of spirit.

In Michael’s Klezmorim ( 2016), the family of Jewish musicians in three generations, violinist grandfather, clarinet playing son, and contrabassist grandson, is whirling in non-stop music which is a pure joy, for the change, and which colours the world around them – and us – into the feast of hope. In this Michael’s work from his Zion Waltz series, the overwhelming joy created by celebrating musicians transforms reality into the bright dimensions marked by the colours which are not that often constituted reality for Jewish people. 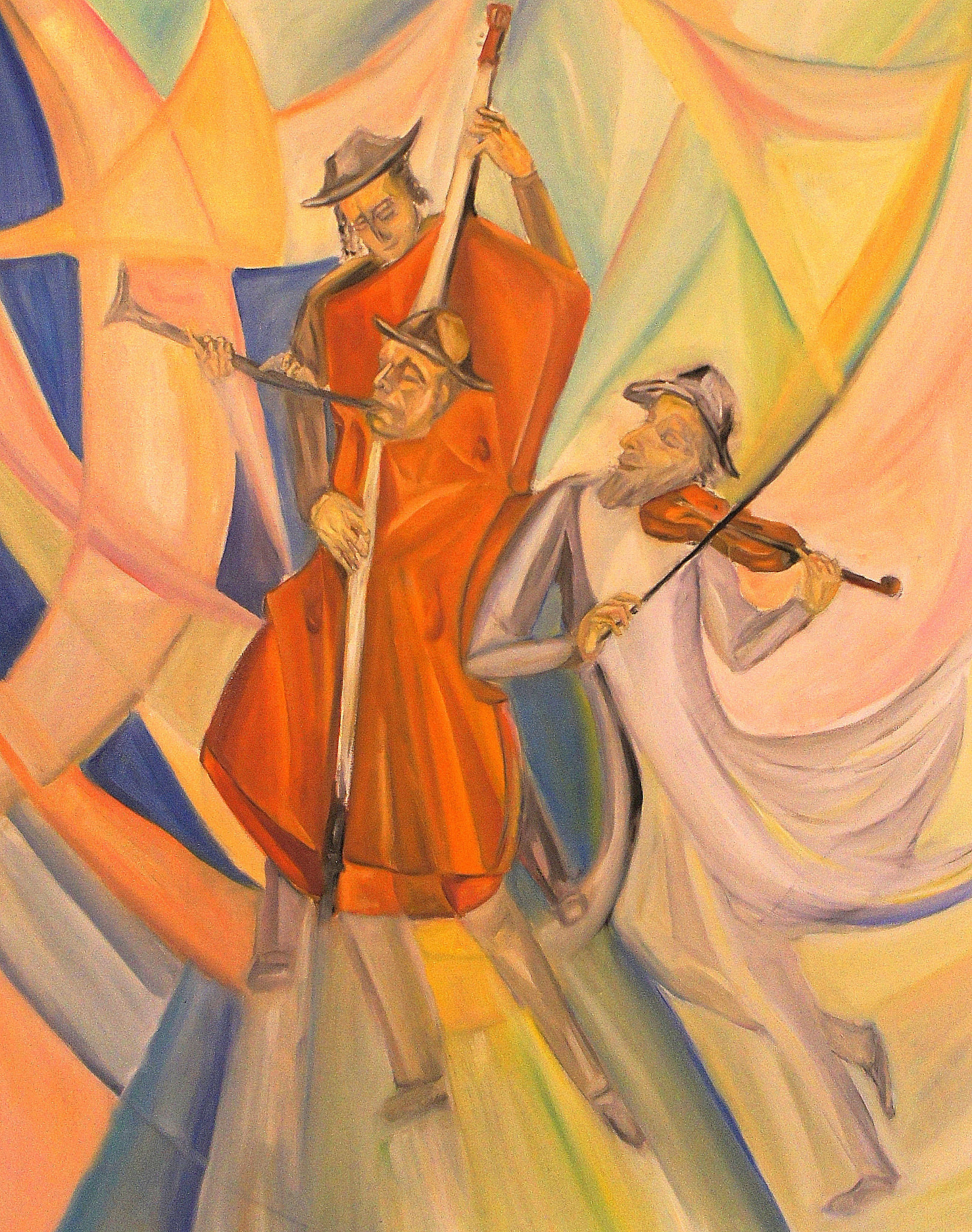 But on Purim, our world becomes like that: inviting, easy, infused with light, happiness , and a non-stopping melody of joy. Special, Purim joy.

Some 20 years before that painting, Michael has created another study of Jewish joy, dedicated to our families and their way to celebrate. The work Freilax ( 1995) is a warm lyrical reminiscence of the inherited way of celebration when every move of every dance,  every syncope and every melody are soaked in our memories, both of immediate family one and of our common one, with all the Purims, from the 5th century BCE onward. 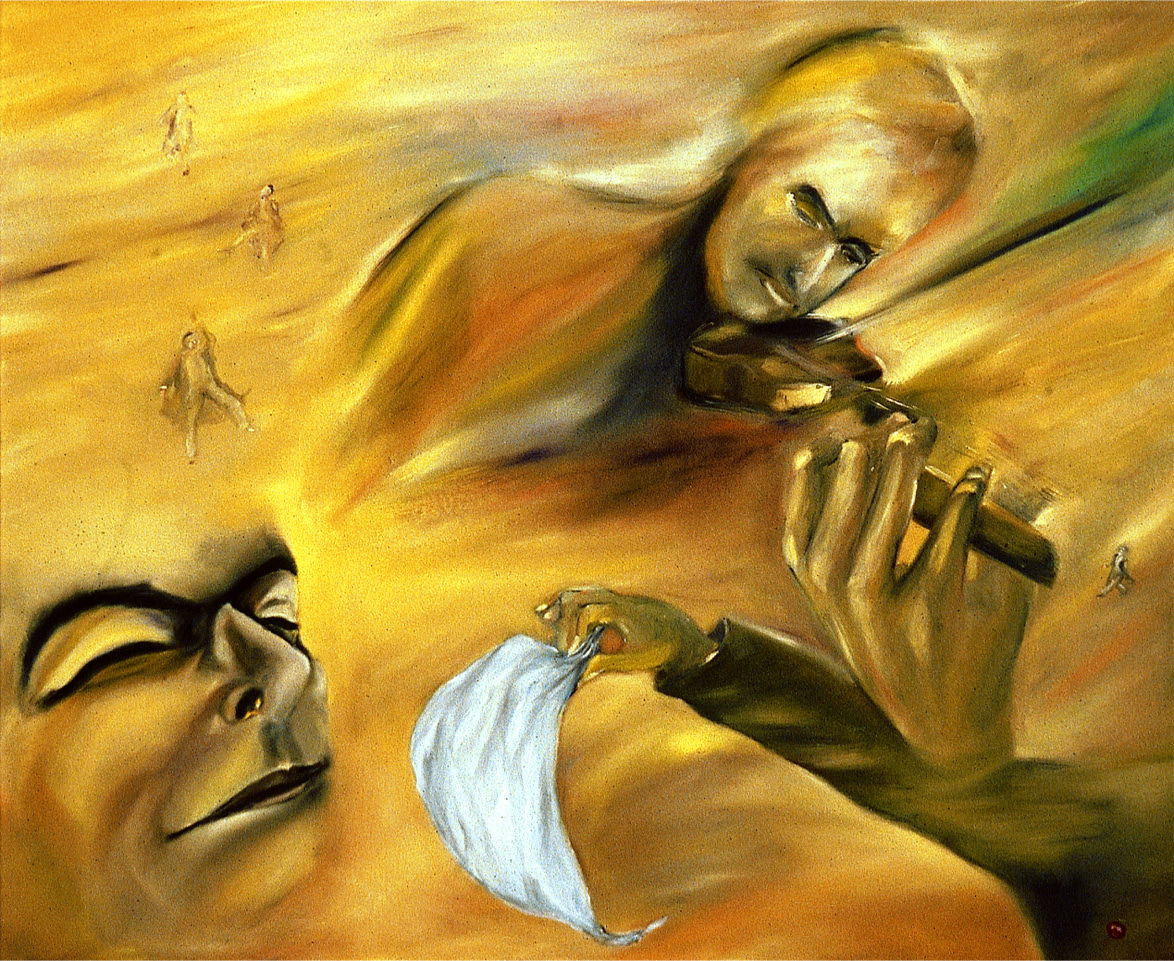 Knowing the history of music well, Michael has a special place in his heart for Jewish musicians, many concrete ones, and also for an archetype of them, and during his career, he has created many well-known images of them.  But the violinist in this work, who quite possibly has opened the gallery of Jewish musicians among created by Michael characters, stays special – in his thoughtfulness, the balance of his emotions, his content, and his belonging to air of our Jewish homes whenever they could of being.

The composition resolution of this tangibly warm painting also brings the metaphor of ever-lasting presence of major phenomena in Jewish life: the characters in this painting are playing and dancing not in the concrete place or time. They are doing it in the cosmos. Jewish cosmos which is everlasting and warm. This is what we bear in ourselves, and this is what bears us in life.